GRIMM UP NORTH horror and Sci-fi festival is back in Manchester this Halloween. Were screening over 30 films and bringing you exclusive horror gaming, exhibitions and seminars.

To celebrate the release of our early bird festival passes, we thought we'd give fans a chance to win some exclusive goodies. We have two copies of RESIDENT EVIL: THE DARKSIDE CHRONICLES for the Wii up for grabs and four exclusive DARKSIDE CHRONICLES t-shirts as runners up prizes (not available in the shops!)

To be in with a chance of winning, all you have to do is go to our website: www.grimmfest.com and answer this question: How many films from this year’s festival line up have been announced so far and what are they? Please email all answers toinfo@grimmfest.com.

The deadline is 5pm, Friday 17th Sept, winners will be announced on the week of the 20th Sept. And remember to check out our fantastic early bird festival passes while you are there! 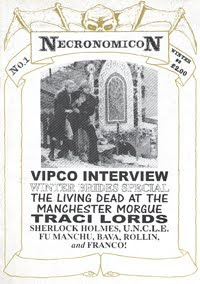 NECRONOMICON magazine resurrected from the dead....only now online & available as an e-zine!!!
After the "magnificent seven" magazines look out for more transgressive cinema only this time in a brand new web based format....
Keep those eyes peeled for more posts soon...

Only the great & gorgeous read The Golden Labyrinth from Noir Publishing...! Here's the living proof with Grog from Die So Fluid!


Dark Dreams almost ready...! Yep, Jim Harper's Anime & Manga follow up to Noir's successful Flowers From Hell is virtually ready to go to press now so look out for copies soon & a first review in SFX magazine which hits the streets during February!

New Austin Stevens Adventures series currently showing on Five on Friday nights at 8 pm - don't miss it! Copies of
The Last Snake Man still available to order - get it while stocks last!!

Hope that you all enjoy the festive frivolities & look out for some exciting new titles in 2010 from Noir, including the first foray into the world of fiction....


AWARD NOMINATION FOR THE GOLDEN LABYRINTH!!